Yalesville Culvert ‘is not going anywhere’

As published in the Record Journal Monday July 8, 2013

The unusual “skew arch” underpass in Yalesville, built of red granite, has been carrying the weight of trains since the late 1800s, so the state figures it can handle a few more trains per day when the second track is replaced and high-speed commuter trains start running between New Haven and Springfield in the next year or two. 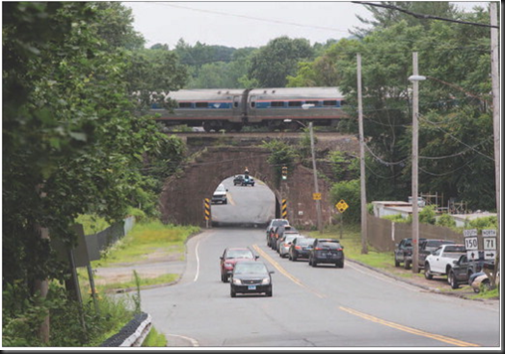 WALLINGFORD - The red granite railroad trestle crossing over Route 150 in Yalesville has a long history. It was built in the mid- or late-1800s by stonemason William MacKenzie, who is buried in the historic Center Street Cemetery — with a stone fittingly made of red granite.

Known as the Yalesville Culvert, it has carried many a train on the New Haven-to-Hartford run on its dual tracks since the advent of railroad travel in the 19th century . Through much of the 20th century, its tracks continued to be well used and the structure remained sound.

But in the 1980s, one of the tracks running through town was removed when Amtrak service was reduced, said John Bernick, a Wallingford resident and structural engineer who is managing the New Haven-Hartford-Springfield commuter rail project. As part of the project, another track will be added to allow for increased traffic in both directions. This will accommodate the 50 rounds trips that the new commuter rail will make when at full service. The state Department of Transportation will take on the challenge of running another track over the culvert, Bernick said.

Trains fueled industrial and transportation growth in this country through much of the 19th and 20th centuries, but became less popular with the mass production of motor vehicles. However, state officials are again pushing trains as the future of mass transportation.

But while nearly everything about train travel has changed, the Yalesville Culvert has remained a constant. It was initially built tall enough to allow for the passage of horse- drawn hay racks, so the local landmark’s height is able to accommodate most of the motor vehicles that now rule the road.

“I think it’s unique in that it is quite high,” said Bernick. “I don’t think you see that too often. I drive underneath there all the time. I can’t think of another one that tall.” The Yalesville Culvert is called a skew arch because it meets Route 150 (Main Street) at 30 degrees, not a right angle. And skew arches are rare, Bernick said. “You don’t see them too much over roadways. Over time, many were replaced with steel structures.”

Ray Chappell, president of the Wallingford Historic Society, said it’s reported that the culvert was the first skew arch built in the United States.

“Both sides are not exactly parallel with each other,” he said.

The culvert was built that way to accommodate the old turnpike, which once ran from Meriden to New Haven. To build the structure at such anangle, MacKenzie had to measure and cut each stone individually. It cost $26,000 to construct.

MacKenzie came to this country from Dyke, Scotland in 1813. Newspaper archives, along with visitor information provided by the town, place the culvert’s construction in 1841, although the town’s website says it was 1838. William MacKenzie’s great-grandson, William Neal MacKenzie,maintained that the culvert was built in 1841. He died in 1999. The state’s log of bridges also dates its construction to 1841. But in a 1995 Record-Journal article, historian Bruce Clouette, author of “Connecticut’s Historical Highway Bridges,” said he thought the bridge was built in the 1870s. Clouette argued that the railroad was constructed in 1838 with only a single track. He found in an 1873 Connecticut Railroad Commission Report that double-tracking was completed in 1872, “which is probably the date of the bridge,” Clouette said, because it’s wide enough for two tracks.

If built in the 1870s, the culvert would not be the first of its kind in the country. For example, in 1857, construction of a skew arch railroad bridge was completed in Reading,

Penn., according to the Historic American Engineering Record.

The bridge may have been widened, Clouette said in 1995, but there’s no explanation to as why it would be a double track bridge in the 1840s.

For Chappell, “there’s enough published on it in different books that says it is the first skew arch underpass in the country.”

“I think the best way to say it is it’s reported as the first,” he said.

Bernick said the bridge was built using wood first, with stone laid over a wooden form. Currently under the bridge is a heavy black timber, which serves as a ballast retainer “keeping the bridge from falling down on the road,” Bernick said. In adding a new track to the bridge, Bernick said, the state DOT will have to replace the timber and “make it so it’s a little bit nicer.”

Wood will be replaced with concrete, he said, adding that work will be overseen by the state’s Historic Preservation Office to “make sure everything we’re doing is fitting with the historic nature of the bridge.”

The bridge has also become a point of lore when it comes to baseball legend Babe Ruth. On Oct. 2, 1920, Ruth was driving a new roadster to Springfield when he collided with a truck at the Yalesville Culvert, according to The Morning Oregonian.

“He landed in a field with his car wrecked, even to the steering post, but he and a friend, who was his passenger, escaped unhurt except for scratches from the broken windshield,” the article states.

According to The Morning Record, Ruth was driving through the area from New York City, where hours earlier he had picked up a new Packard roadster. In this account, Ruth was unable to negotiate the sharp turn at the culvert, which has since been straightened, “and crashed into the concrete abutment.”

In its many years, the bridge has been through its share of history. Bernick said that with its engineering, it will continue to stand for years to come.

“Those stones underneath that arch are pretty tight,” he said. “It’s really gravity holding that thing together. That’s the beauty of engineering.”

If the load on the bridge isn’t changed, its stones will last beyond the lifespan of steel, which tends to rust and fatigue, Bernick said.

“That stone is not going anywhere.”

Jason Zandri
I have been working in the information technology field in one form or the other since 1996. I am currently employed full time at Tallan, Inc. as a Senior Cloud Infrastructure Consultant. I live in Wallingford Connecticut, which is my hometown where I have lived my whole life.

I have a passion for technology and I clearly do not sleep much.

I’m always looking for input so drop me a note and let me know what you’d like to see.